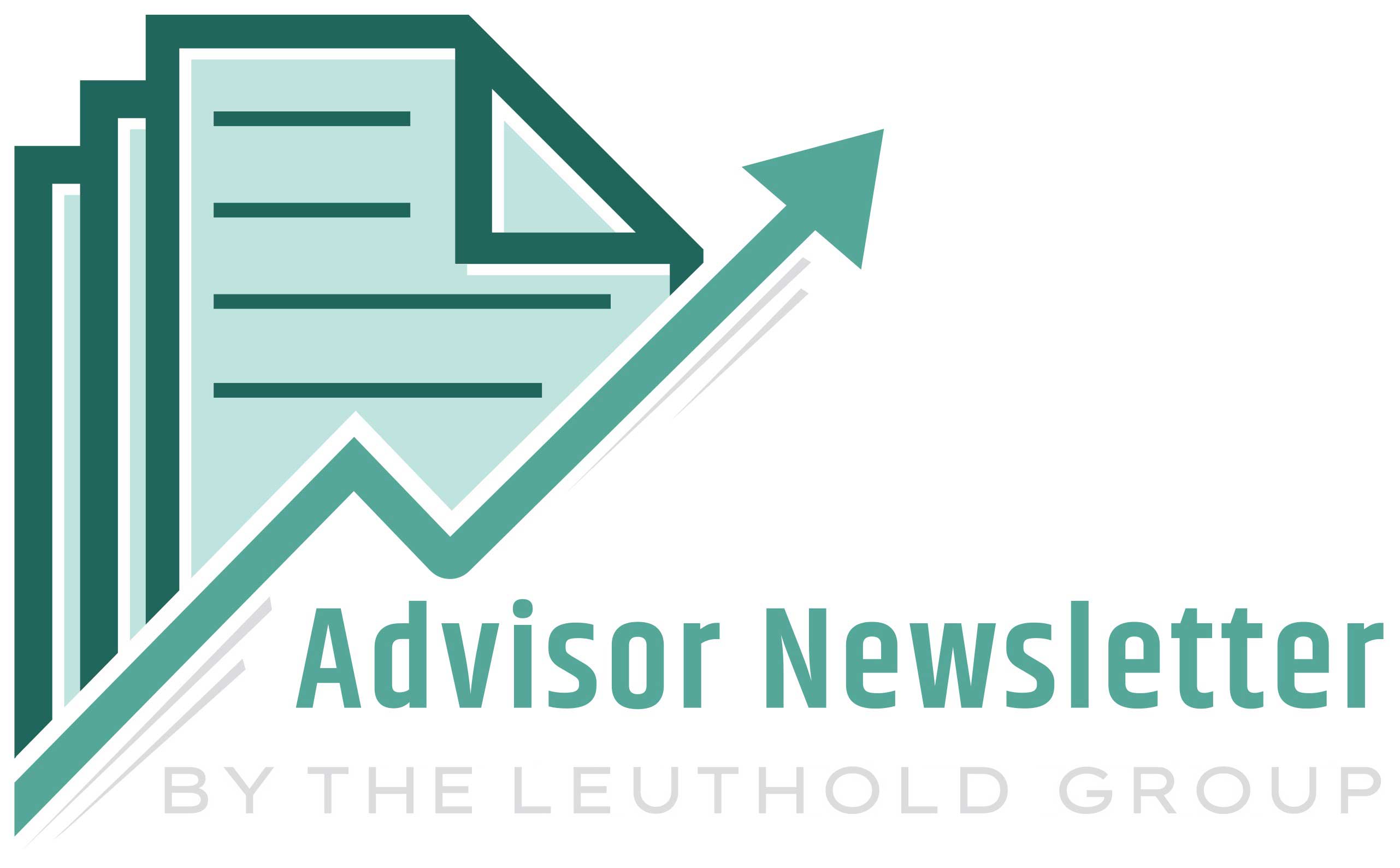 If you are interested in signing up, Leuthold Advisors Newsletter subscriptions include a no-obligation 14-day trial. Cancel at any time before the 14 days are over and you will not be billed.

The stock market has been stressful of late. First, the S&P 500 had a rough autumn, declining by more than 5% from September to early October; after a brief recovery, stocks hit another sudden air pocket in late November. Both times, the VIX™ Volatility Index spiked above 20, and broader-market stocks suffered even steeper declines (e.g., small caps, cyclical stocks, and international investments).

There has been plenty to worry about. This bull market has yet to suffer an official correction and seems far overdue for a good gut-check, as valuations are extremely high compared to long-term historical averages. Furthermore, the inflation rate just rose to a 40-year high, product shortages continue to frustrate shoppers, and the yield curve is flattening in anticipation of imminent Fed tightening.

Although the stock market will undoubtedly pose challenges in the coming year, a couple of the biggest fears causing stress for investors may prove less treacherous than perceived—and at least one favorable dynamic reinforcing the bull market is underappreciated. What follows are just a few comforting reminders to help investors relax a little during this holiday season.

1. The Aftermath Of An Inflation Surge?

The annual rate of consumer price inflation (CPI, Chart 1) surged to 6.8% in November, its highest pace in 40 years! The speed of inflation moving from zero (May 2020) to almost 7% is shocking and unsettling. How can this not turn out bad for the stock market? 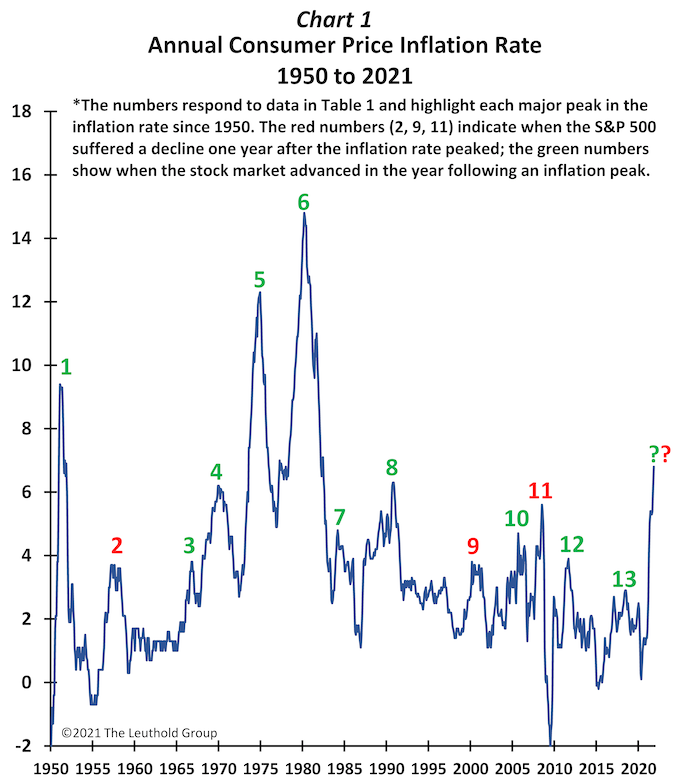 A portion of the recent CPI upswing was due to the base effect assessed against last year, and some (including me) believe the annual CPI inflation rate probably peaked in November. Of course, not everyone agrees with this opinion—inflation could certainly continue higher in the coming months. Nonetheless, according to Bloomberg, a consensus expects annual CPI inflation will top out in the fourth quarter, and, while remaining elevated next year, is apt to decelerate.

Many investors are understandably anxious that the inflation explosion of the last year will catch up to the stock market. At least since 1950, however, as depicted in Chart 1 and Table 1, the stock market has generally performed well in the aftermath of major CPI peaks. 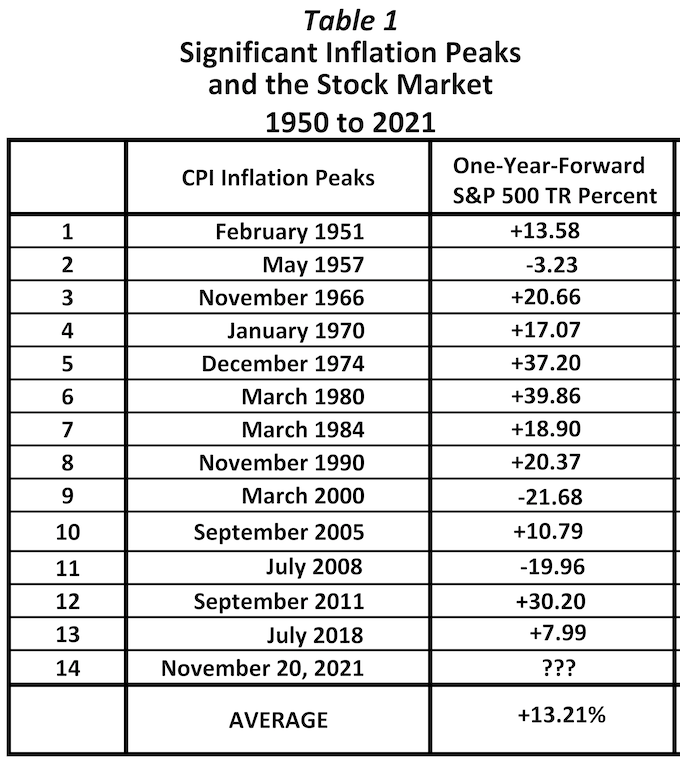 If the current inflation surge is nearing its high point, it will represent the 14th significant peak in the annual inflation rate back to 1950. Following ten of those previous 13 inflation peaks, the S&P 500 total return rose over the next twelve months. In one of the three other cases, the S&P 500 fell about -3% (May 1957), and the index declined by -20% in the two remaining episodes (March 2000 and July 2008). By comparison, in the ten occurrences when the stock market rose in the year following a substantial inflation spike, the S&P 500 rose by an average of +21.7%!

While today’s inflation level is frightening, historically, stock market performance in the aftermath of a prominent inflation peak is quite encouraging. Typically, stocks struggled while inflation rose—not after it peaked. In the contemporary expansion, the inflation story is still being written. However, even if inflation stays elevated in the coming year, if the overall inflation rate soon hits its ceiling, this has traditionally proved bullish for the stock market.

The Fed announced that tapering will finally begin, and rate hikes will soon become a higher priority, which is a hawkish change that is unsettling for investors. Currently, the poster child for Fed fears is a flattening yield curve. Many are concerned because the yield curve is not nearly as steep as in previous expansions in post-1970 history (the yield curve is only 1.5% compared to about 3% in past recoveries). Additionally, there is not nearly as much room to raise rates before a flatter yield curve hurts both the economy and the stock market.

Yet, as shown in Chart 2, historically, a flattening yield curve has not customarily been a disaster for stock performance. This chart illustrates how the stock market has performed since 1962 for all months when the yield curve steepened (blue bars), flattened (green bars), flattened without inverting (brown bars), and when it inverted (red bars). 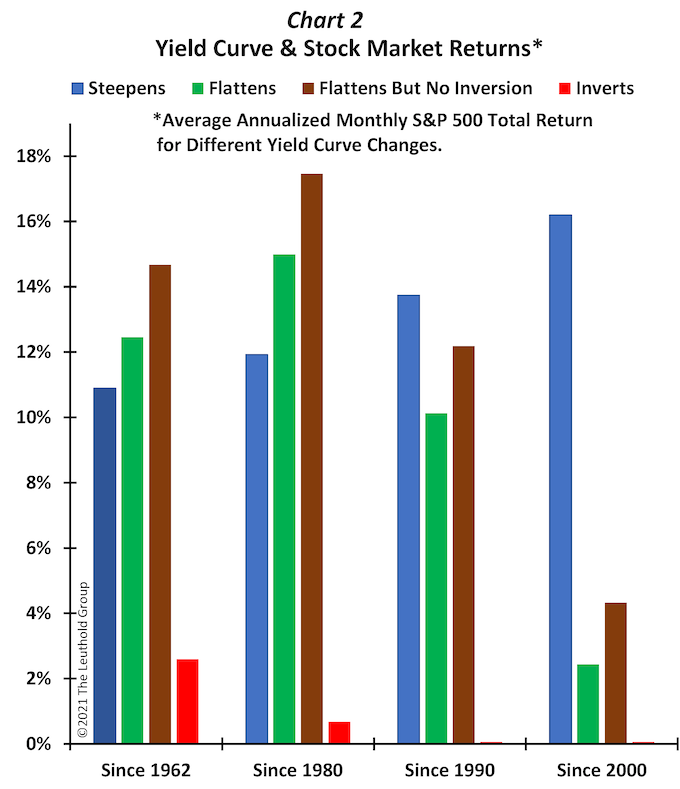 Contrary to popular perception, the data from 1962-forward reveals that the S&P 500 performed better when the yield curve flattened than when it steepened. That experience has also been the case for all months back to 1980. Measured from 1990 forward, though, a steepening yield curve produced slightly better stock market results than a flattening yield curve. Yet, over the 1990 to date period, for all months when the yield curve flattened, the average annualized total return was still +10%, and it was +12% during flattenings that excluded yield-curve inversions.

So, what has changed since 2000? Growth! Chart 3 illustrates the stock market impact from curve flattening or steepening depends critically on the pace of real economic growth. From 1962 forward, when the annual rate of real-GDP growth exceeded 2.5%, the S&P 500 performed far better when the yield curve flattened than when it steepened. Alternatively, when real-GDP growth was 2.5% or less, curve flattening was far more damaging to stock results than was a curve steepening. 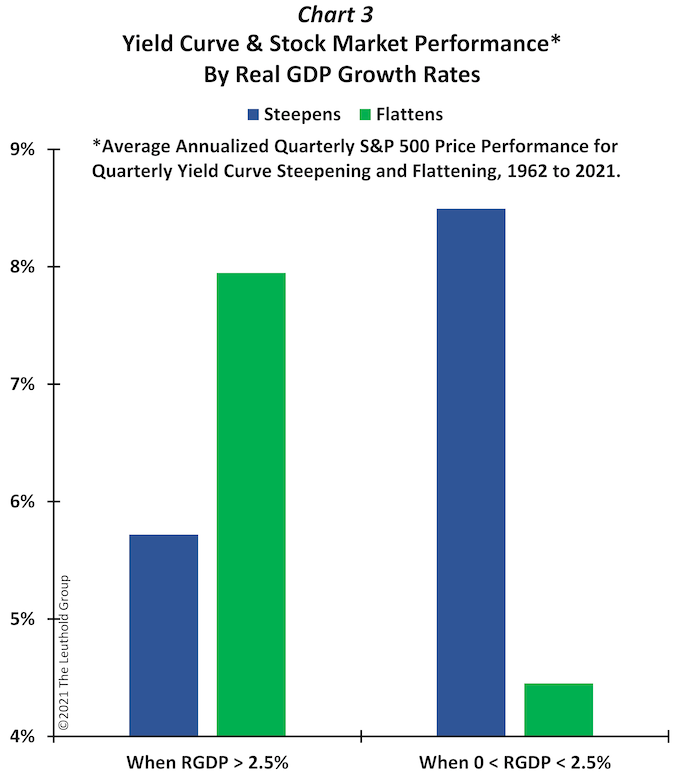 Today’s stock-market reservations surrounding a flatter yield curve are based on the investment experience of the last 20 years. Prior to Y2K, the investment culture seems to have had a very different attitude about curve flattening—because the pace of annual real-GDP growth was below 2.5% only 22% of the time.

That is, for the most part, economic growth was sufficiently strong, so that curve flattening essentially calmed overheat fears and enhanced stock market returns. On the other hand, when economic growth was robust in that era, a steeper curve suggested inflation pressures would worsen, which alarmed stock investors. Post-Y2K, though, annual real-GDP growth has been less than 2.5% for about 65% of the time!

Consequently, Fed tightening or curve flattening only exacerbated investors’ “growth fears,” causing the stock market to struggle. By contrast, investors have embraced curve steepening, perceiving it as the “sugar” that helps boost economic growth and the stock market.

In much of the post-Y2K world of chronically sluggish real-GDP growth (< 2.5%), any sign of Fed tightening was characterized as “frightening.” Higher rates, a flatter curve, or slower money-supply growth caused unease in an economy that constantly grew near the “2%-stall speed.” Therefore, even when the Fed began talking about tightening, it was a big concern for stock investors.

Today, however, we no longer live in that world. Instead, we live in the pre-Y2K world, if not the pre-1980 world, when real economic growth remained solidly above 2.5% and people were more apprehensive about overheating than underheating. In that world, like today, Fed tightening and curve flattening actually enhanced stock market returns!

What is clear from Chart 2 is that a yield curve “inversion” has consistently been damaging for the stock market. Yet, with the fed funds rate near zero and the 10-year Treasury yield around 1.5%, an inversion seems a ways off. Indeed, before the Fed finally starts to raise the funds rate, it is a good bet the 10-year Treasury yield will rise back toward, or above 2%. Normally, the Fed does not begin lifting the funds rate until bond yields rise. Thus, expect the yield curve to steepen before a consistent flattening trend begins.

We anticipate real-GDP growth in 2022 will be 4.5%, with nominal-GDP growth of possibly 8.5%. Regarding yield curve movements, the U.S. economy is, therefore, “back to the future,” when curve flattening eased overheat anxiety and helped fuel stock market gains. So, calm your curve fears!

3. Remember That Record Low Bond Yields Is A GIFT!

In 2020, the 10-year bond yield collapsed to its lowest level ever recorded in U.S. history. It has subsequently risen but remains near all-time historic lows. So, a 1.5% 10-year yield is almost starting to feel normal. But it’s not!

Investors have plenty to be nervous about today but shouldn’t let those misgivings obscure an appreciation of the absolute “GIFT” the current investment generation has been presented. Since 1950, the 10-year bond yield was below 3% less than 25% of the time, and it won’t likely be that low for much longer. Chart 4 highlights what a sub-3% 10-year Treasury yield has meant for stock investors: The average annualized, monthly total return for the S&P 500 is +21.9% compared to only +10% the rest of the time. 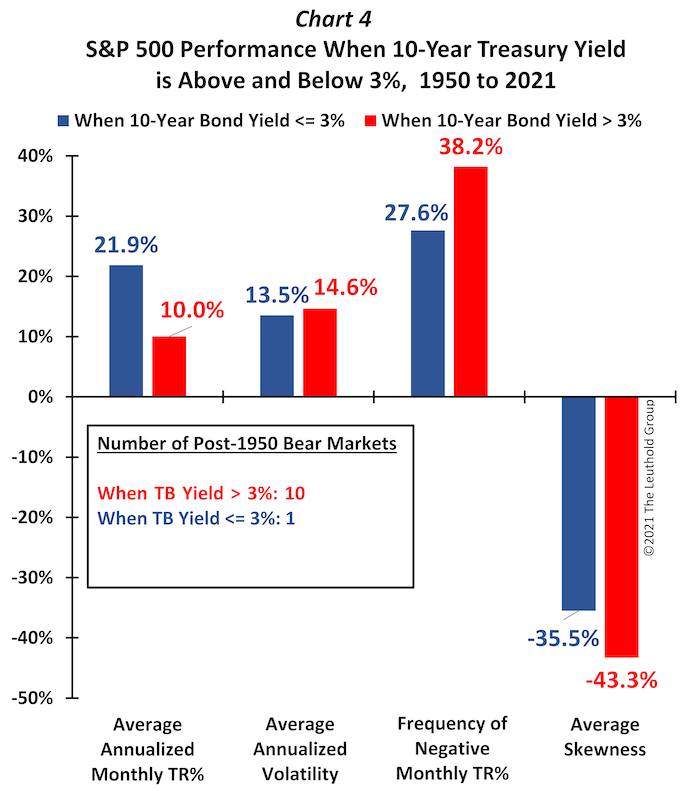 This phenomenal outperformance comes with slightly-less return volatility. The frequency of a negative monthly total return is only 27.6% versus 38.2% when yields are above 3%, and the negative monthly-return skewness is almost 20% less (-0.35 vs. -0.43). Finally, of the eleven bear markets post-1950, only “one” occurred when the 10-year yield was 3% or below (and that was 2020, which experienced an exogenous event).

Investment worries will never subside, and the stock market is quite likely to experience a correction soon. Nonetheless, don’t lose sight of the fact that many previous investment generations would gladly change places to enjoy the GIFT of a sub-3% bond yield.

At present, inflation is obscene, but if it does peak soon—and if history is any guide—the stock market may surprise. Be careful what you wish for regarding the Federal Reserve. A “tightening” by the Fed may be met by much more investor optimism than the last 20-years’ generation has come to expect. Finally, don’t look a low-yield GIFT horse in the mouth!

It will likely be a considerably more challenging year in 2022, and the stock market may hit a few air pockets. But perhaps some of your worst nightmares will turn out better than expected. So, today, sit back and pour yourself a holiday eggnog, add a little something to calm your nerves, and savor the taste that you just might be investing at an historically lucky time!