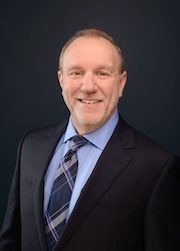 A survey asking equity investors whether the stock market does best with a strong or weak U.S. dollar would likely yield a variety of contradicting opinions—and they would all be correct! Like many couples, the stock/dollar relationship is complicated. Sometimes they get along blissfully, other times they separate because they find they rarely agree and, often, they simply seem indifferent to each other. They are an odd couple!

Nonetheless, investors need to monitor whether this union is running hot or cold because it can have a significant impact on overall portfolio results. In the last decade, the relationship has been more acrimonious than at any time since the U.S. dollar came off its peg in the early 1970s. The negative correlation suggests the stock market has done best when the dollar has been the weakest, and periods of strength in the U.S. dollar have often led to a more difficult environment for stock investors. Moreover, stock market sensitivity to changes in the U.S. dollar—regardless of whether the dollar rises or declines–has been more pronounced in the last decade than at any time during the last 50 years.

Will the stock market and U.S.-dollar relationship remain estranged in the next several years and should portfolios therefore be positioned to benefit from ongoing strife in this marriage? Or, will a renewed ‘spark’ soon bring back a more harmonious courtship? 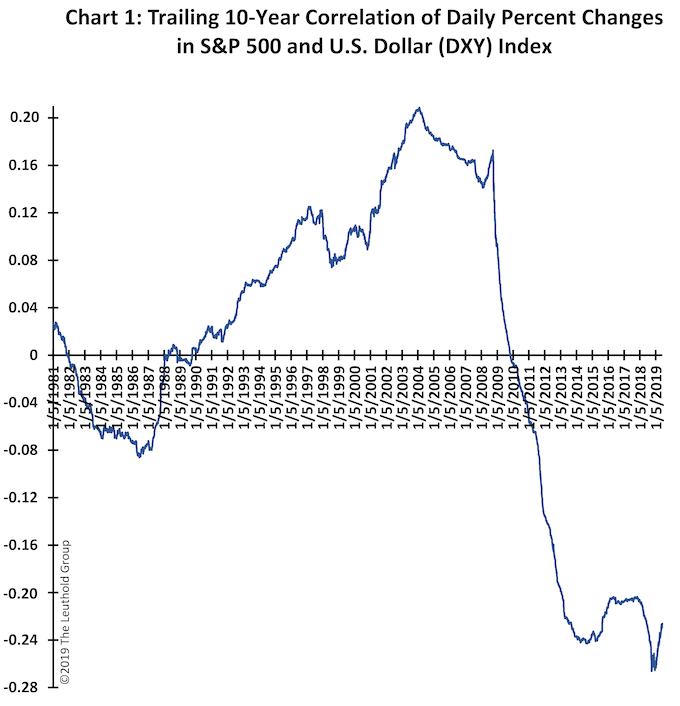 Chart 2 highlights how the stock market has reacted to changes in the dollar for each decade since the 1970s. Specifically, it shows the S&P 500 average daily basis-point change (100 basis points comprise 1%) for all trading days when the U.S. dollar index rose, and for all days when the dollar index declined. A few points are noteworthy. 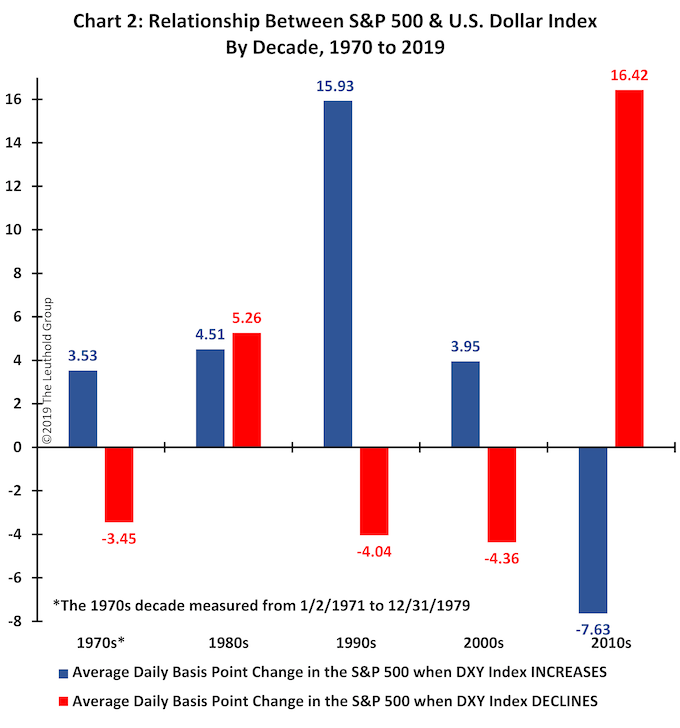 Third, the extent of the response from the stock market to changes in the dollar has been larger in the last decade than it has in any other decade since 1970. That is, in the contemporary recovery, not only has the stock/dollar relationship uniquely changed sign (i.e., a strong dollar is now bad, and a weak dollar is now good) but the stock/dollar ‘price beta’ is much larger compared to any other decade! On average, the S&P 500 daily basis-point change due to movements in the dollar has been much larger over the last ten years. During the 1970s, 1980s, and 2000s, the price beta ranged between -4.36 and +5.26. By comparison, in the last decade, the price beta has ranged from -7.63 to +16.42! (Even the 1990s’ wide price-beta oscillation was less than it has been during the last ten years.) 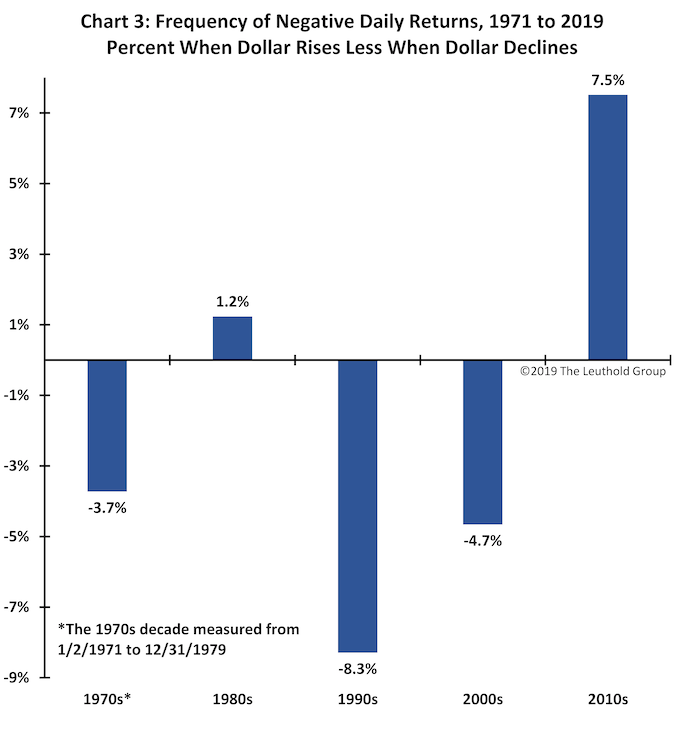 What Drives The Stock/Dollar Relationship? 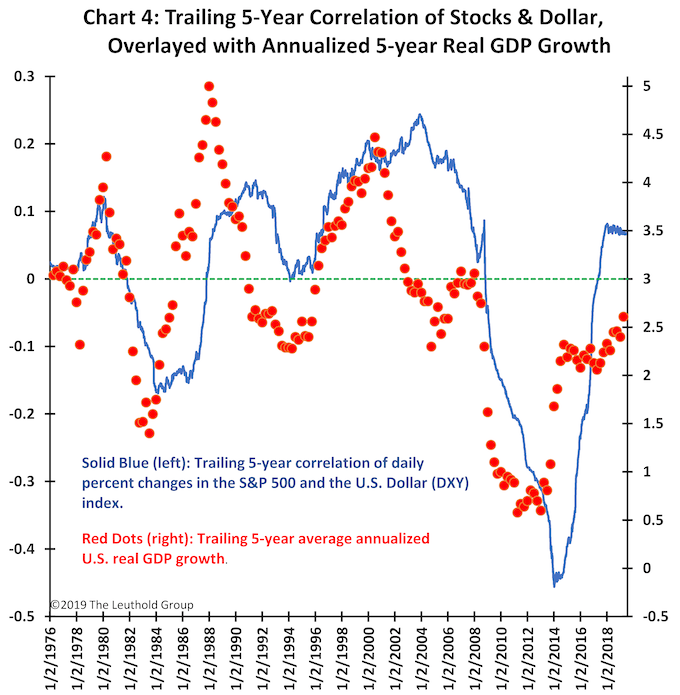 Solid economic growth during both the 1970s’ and 1990s’ economic recoveries was associated with a strong positive relationship between the dollar and the stock market. However, as economic growth slowed after 2000, the stock/dollar correlation began to diminish and actually turned negative in the destructive aftermath of the 2008 crisis. In the last five years, however, economic growth has improved to its fastest pace since the last recovery and the correlation has again recently turned mildly positive.

Our guess is the relationship between the U.S. dollar and the stock market is related to the pace of economic growth because this establishes how concerned investors are about inflation. During periods of strong economic growth, corporate earnings are usually healthy and investor concerns often turn toward overheat risk. Consequently, when economic growth is solid, equity investors prefer a strong and rising U.S. dollar to ensure inflation and interest rate risks are kept moderate. Conversely, when economic growth is weak, stock investors are most concerned about sluggish earnings performance and welcome a weak U.S. dollar, both because it helps stimulate U.S. growth and because it improves the competitive position of U.S. companies.

In this fashion, the pace of economic growth has determined whether the U.S. dollar is friend or foe for the U.S. stock market.

The green dotted line in Chart 4 implies that an economic growth rate of about 3% may be the dividing line between a positive or negative stock/dollar relationship. Historically, real GDP growth above 3% has usually been associated with a positive correlation, and growth below 3% has often led to a negative correlation.

Can the U.S. economy consistently deliver growth above this 3% threshold in future recoveries and keep this odd couple happy? Certainly, during the balance of the contemporary recovery, given that the U.S. is already at full employment, sustaining a 3% real GDP growth rate seems unlikely. Moreover, both within the U.S. and around the globe, aging demographics, compromised balance sheets, and monetary and fiscal policies, which have been overused and are spent, may also keep solid economic growth challenging in future expansions.

Consequently, equity investors should be prepared for further discord among this odd couple. Expect a strong U.S. dollar to be a foe more often than the conventional friend it has been during the majority of the last 50 years!